Pro tip: Don't forget to hit "Enter" on your keyboard to apply the changes! 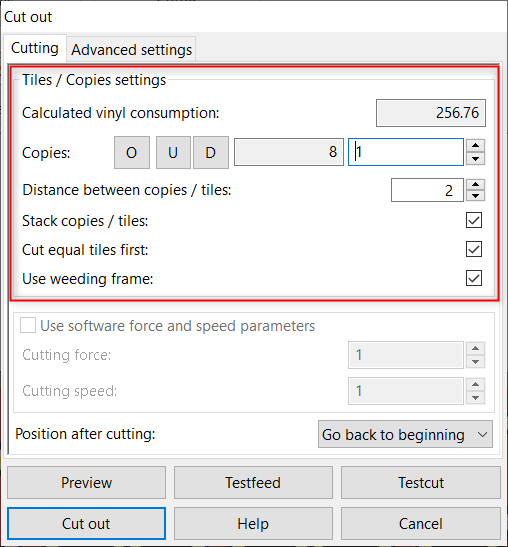 The O-button stands for "Optimize". If this is enabled (it is normally activated by default), the number of stacked copies can be increased by decreasing the weeding frame distance, and the distance between copies/tiles.

Pro Tip: Click this button to optimize the vinyl usage!

The U-button stands for "Up". If it is clicked, it will round off the number of copies up to the nearest stack size. In the example above, one (1) copy is entered, and with the U-button clicked, it will be changed to 7 copies. This is very useful if a customer, for example, orders 35 copies, the value "35" is entered in the copies box. And with a click on the U-button, it will round up the number of copies that the maximum vinyl width can accommodate.

The D-button stands for "Down". if it is activated, it will subtract the number of copies to be cut-out (marked in blue) by the number of stacked copies/tiles that fit the width of the vinyl (marked in red).