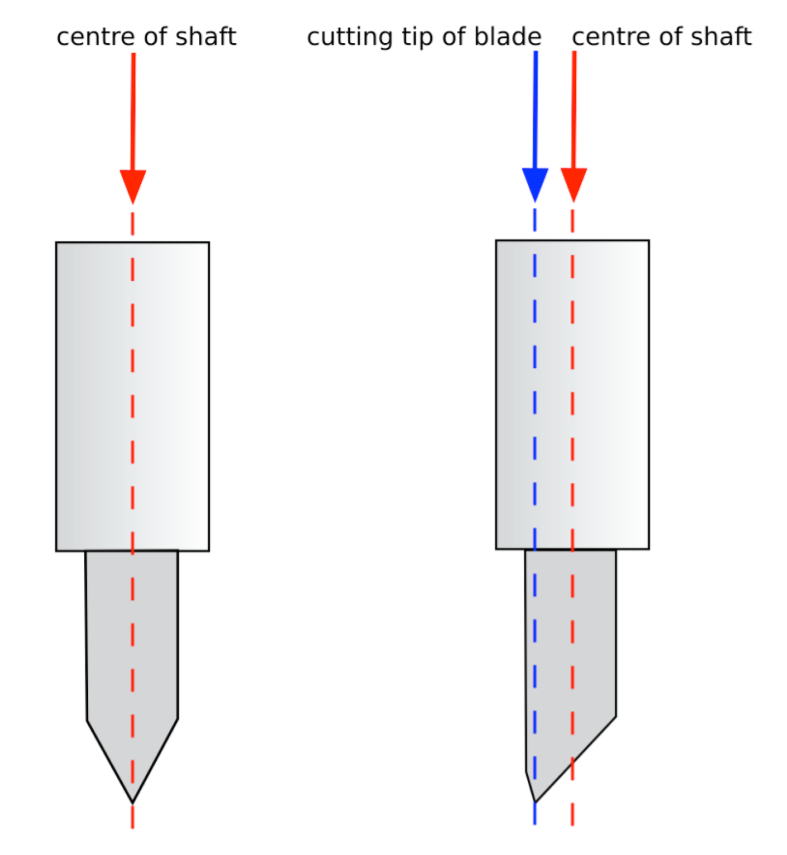 Some machines have a fixed offset and you will not be able to alter them, but where the machine does allow for an offset value to be set in the software ensure you use the correct values in order to obtain the best quality of cut. Offset is the distance between the centre of the blade shaft and the blade tip. This value, usually given in mm, varies with the manufacturer of the blade used and is sometimes related to blade angle. The most common blade angles are 30, 45 and 60 degree. There are other specialised blades which may have the same cutting angles but very different offsets because of their design for cutting particular types of media eg those which are thick and/or dense. The diagram below shows these three blade angles all from the same manufacturer. Each one has the same offset between the blade tip and the centre of the shaft. 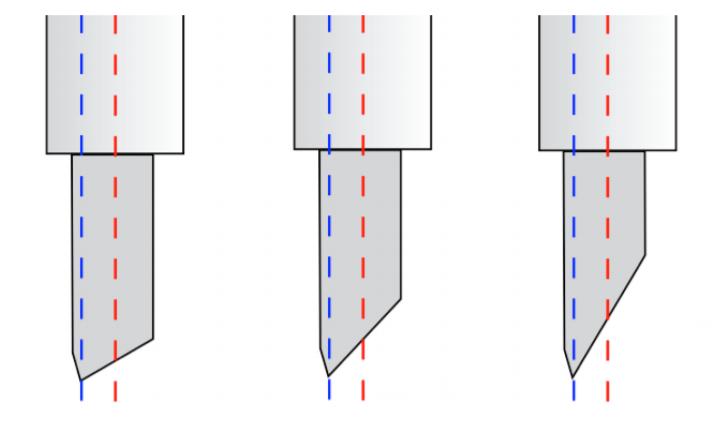 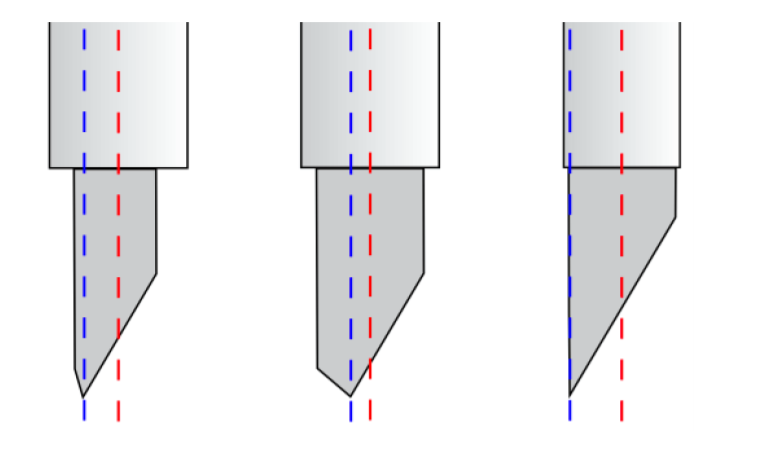 If the offset value is incorrect the quality of the cut is seriously affected especially on corners as shown in the diagram below.

The effect of the blade offset means another correction is needed when cutting closed shapes, this is the overcut. Because of the difference between the centre of the shaft and the cutting tip of the blade, the tip trails behind the centre and so the overcut needs to add an additional length onto the end of each closed shape to make sure that shape is completely closed. A standard overcut setting is 0.5mm to 2mm depending on the blade and the media.

If your machine and blade holder allow for the blade depth to be changed then setting the correct blade depth is important in obtaining a good cut but also in prolonging the life of your blade and carrier mat. The depth of the blade is often confused with the pressure used to cut with can give similar results. 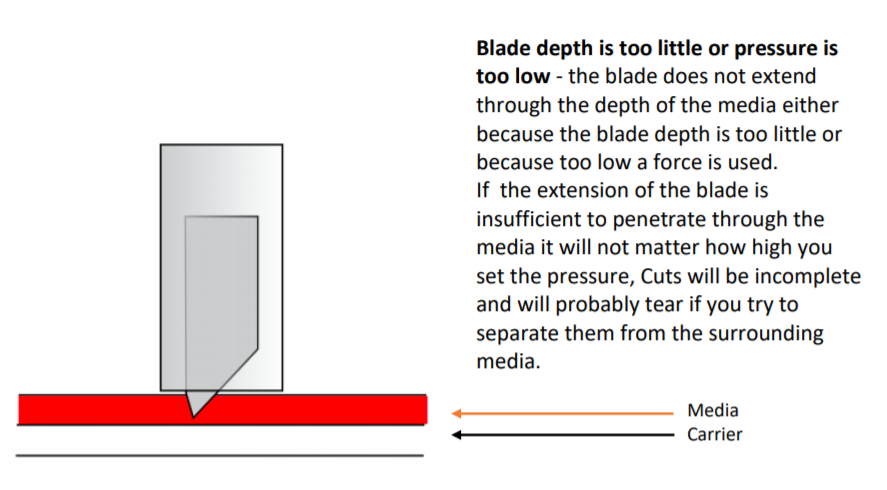 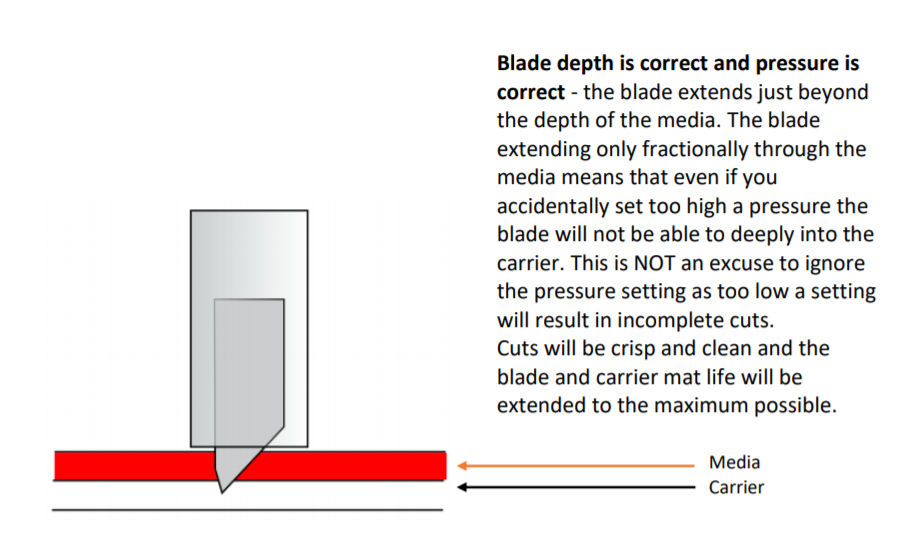 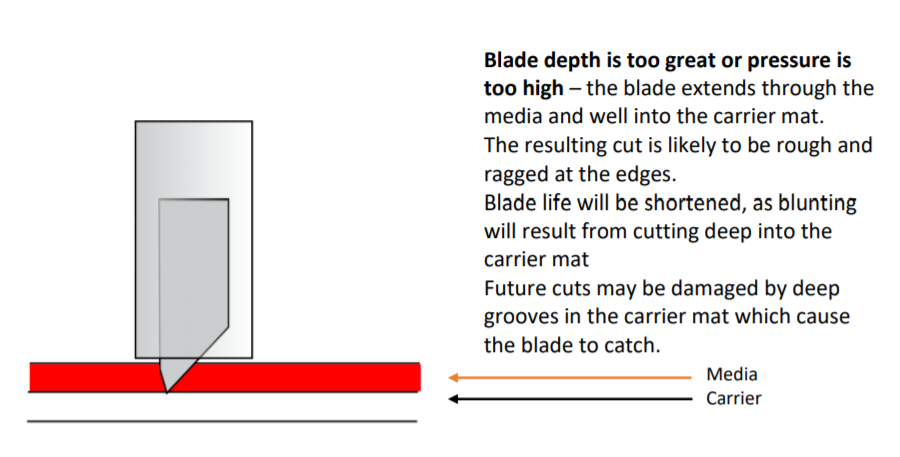 The speed at which a design should be cut is determined by the media being used and the particular design being cut. The more complex a design the slower the speed should be to allow the blade to move cleanly around complex curves and small shapes. A simple shape such as a square or circle can be cut much faster than a design consisting of multiple curves and corners. The easier the media is to cut then the faster the speed that can be used. Vinyl cuts very easily and cleanly and can often be cut at the maximum speed of your machine even when the design is complex. Thick medias such as mountboard, greyboard etc need a much slower speed as the blade has a greater area to cut through. There is even the danger on very thick media that the top of the blade has turned the corner before the tip, resulting in the tip being snapped off completely. Other media that can be tough to cut through but also easily broken, eg. wood veneers, need a slower speed to avoid fracturing along the grain of the wood.

Virtually all machines need the media to be attached to a backing or carrier to stop the design moving as it is being cut. Vinyls come with a backing, either plastic or paper, and can be cut without a carrier or can still be placed on a carrier if required. Most carriers are plastic mats with a repositionable adhesive on them. The adhesive is usually low tack and is ideal for holding paper and card. You should ensure that you always have sufficient adhesive on the mat to hold the media in place, if it moves even a little the cut will be distorted and torn. However too much adhesive is as bad as too little as the card or paper will then tear when being removed from the mat. Experience will guide you in how much to use and when it needs refreshing. Some medias do not stick well to a low tack adhesive. Wood veneers, leathers, even some plastics, fabrics etc. Media such as these need either a carrier mat with a stronger adhesive, or in the case of fabrics a fusible backing that will stick to the mat easier can be used.

Lastly, many machines have a test cut that allows for a small rectangle to be cut rather than the whole design thus preventing waste when the correct speed and pressure are not set for the media being used. While these are very useful they are often of too simplistic a nature, a rectangle will cut much easier than a complex shape with curves and sharp angles. So you may get a perfect test cut with a force that is a little too low or even with a blunt blade. Instead a shape like this below may prove to be a more accurate indication of the correct settings. It may all seem overwhelming at first, but it soon becomes second nature and with experience you will find that you can often feel a piece of paper or card and tell what the correct settings should be by the feel of it. It is also good practice to keep a little notebook where you can write down the settings you have found successful for the media you cut. It isn’t a good idea to rely on others settings as even with the same make and model of machine settings can still vary. 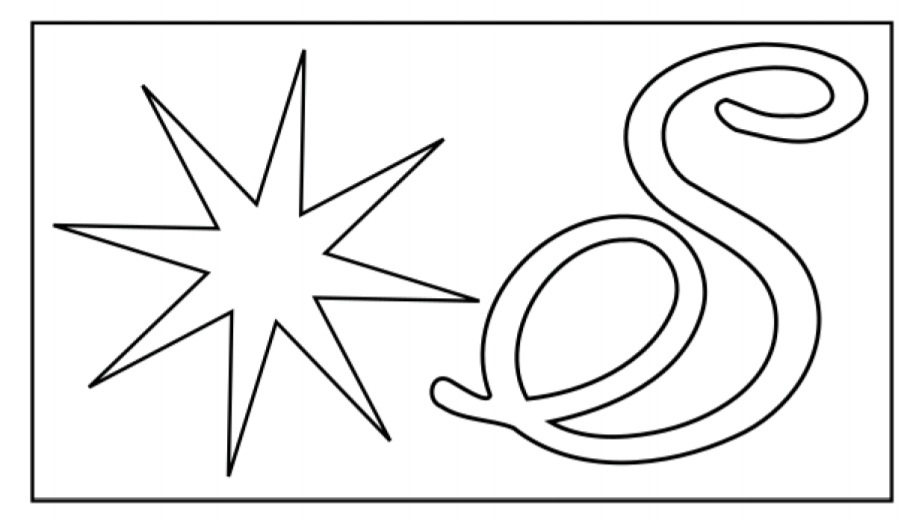